Over the years, we were frightened by textured needles for tattoos, we were told that they were traumatizing, tearing the skin and adversely affecting the healing process.

So what are the textured needles initially and how do they differ from conventional ones?

The textured needle looks like a normal polished needle with the naked eye, but has a micro groove on the working surface, whereby the needle brings more pigment into the skin and makes the tattoo procedure more simple, quick and less traumatic.

The area of ​​the textured needle is slightly larger than the usual polished needle of the same diameter due to grooves, in this seemingly insignificant nuance is the undeniable advantage of textured needles, allowing them to make more pigment under the skin.The textured needle keeps a pigment on its rough surface, while from the polished surface it slides like a drop of water from the glass.

On a normal, polished needle, the paint is present on the needle due to the voids between the soldered needles, only until the needle enters the skin, with penetration, most of the paint remains on the surface of the skin without reaching the desired purpose. 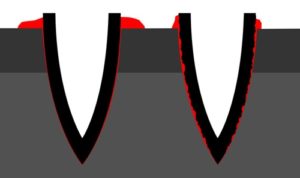 The needle stretches the skin in the minimum gap between the textured needle and the skin and leaves more pigment due to micro grooves on the surface of the needle. 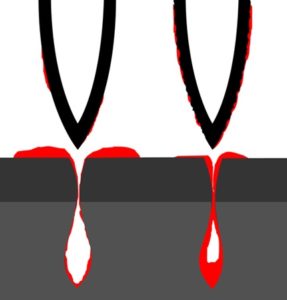 The texture of the tattoo needle helps to leave more pigment under the skin from one pass.This may sound frivolous: micro roughness, invisible to the eye texture …,but we are talking about the micro level, the regenerative properties of the skin, which is completely unnecessary, unnecessary traumatization, because the first goal of the tattoo artist is to make the tattoo as quickly as possible with the least traumatization, as brightly as possible, with color preservation and speedy healing!

Will the roughening of the needle play a role in traumatizing the skin and “break” it?

The point is that the process of inserting needles under the skin with the frequency of the work of the machine’s tattoo is already in itself traumatic, and the less manipulation takes place on one area of ​​the skin, the less you injure it. The texture of the needle allows you to contribute more tattoo pigment without the need to “pass” one place several times, because the more you try to make the pigment in one area, the more you injure the epidermis, so that most of the dermis remains open, and this leads to a prolonged healing and the formation of scabs, the dull color of the healing tattoo, no matter how bright and persistent pigments you use. 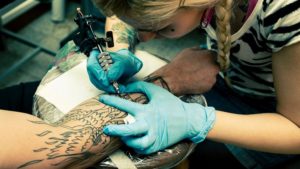 Type of skin and various roughness or texture of the needle, does it matter?

Yes, important and more than that! Where do the needles come from? China, America, Europe.

Chinese needles received more recognition due to their low price A smaller market segment, American brands of needle tattoos. As a rule, they are use by masters seeking quality tattoos, and a very small European resource. It usually receives needles from the same America or China. So, let’s figure out what’s what:

In this case, the technology of the “correct texture” uses, that is, the surface of the needle tip undergoes polishing, which facilitates the rapid penetration of the needle under the skin and excludes traumatization, followed by a textured part that introduces the pigment into the skin. Asian manufacturers are 99% oriented towards the American market.

Conclusion: Wherever needles are produced, they are produced for America. Quality, reliability seems to be guaranteed, but there is one BUT! These needles are designed for a different skin type!

American brands require a certain roughness of the texture, due to the type of consumer’s skin, these are African Americans, Hispanics, Indians, Métis, Mulattos and only 35% of whites. So, we use tattoo needles designed for a different type of skin? Taking all these facts into consideration, we chose a less rigid texture for the European skin type. 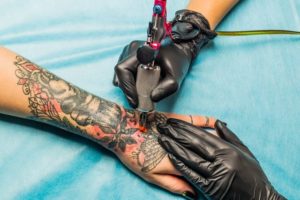 What is the difference between the skin of an African American, a European or an Asian?

Surprisingly or not, the skin color is not only that distinguishes us between these three groups. Scientists have discovered structural differences between black, white and Asian skin in terms of:

The epidermis of black skin contains less glutathione (Glutathione) is a simple molecule. The secret of its power is the presence of sulfur-containing SH groups.

In the end, we get 100% confirmation that a coarser texture is require for dense. Coarse, thick, UV-resistant and rapidly regenerating African-American skin than for the European skin.

Throughout the year, through numerous trials, we achieved the desired result.

We found the right needles in England and after a little refinement we achieved the desired texture effect. For several months we tried them and looked at the healing results. After final approval an exclusive brand and a new word in the texture, was created and put into production.